Han Solo and Chewbacca’s adventure continues! When we last saw them, they were stuck with seemingly no way out — a situation they have been in countless times. This issue sees them launch a daring escape, fuel the fires of the feud with Greedo, briefly crossover with another comic arc, and land in the clutches of a revered bounty hunter.

Marc Guggenheim gave us several moments of Han wrestling with whether Ovan was truly his father or not in the previous issue, but this one takes a step back from that and focuses more on driving the plot forward. I have mixed emotions on some of the choices made in terms of a mini arc crossover, but they don’t detract from Han’s story. It’s also important to note Guggenheim has captured the essence of Han Solo a little bit more with each issue. 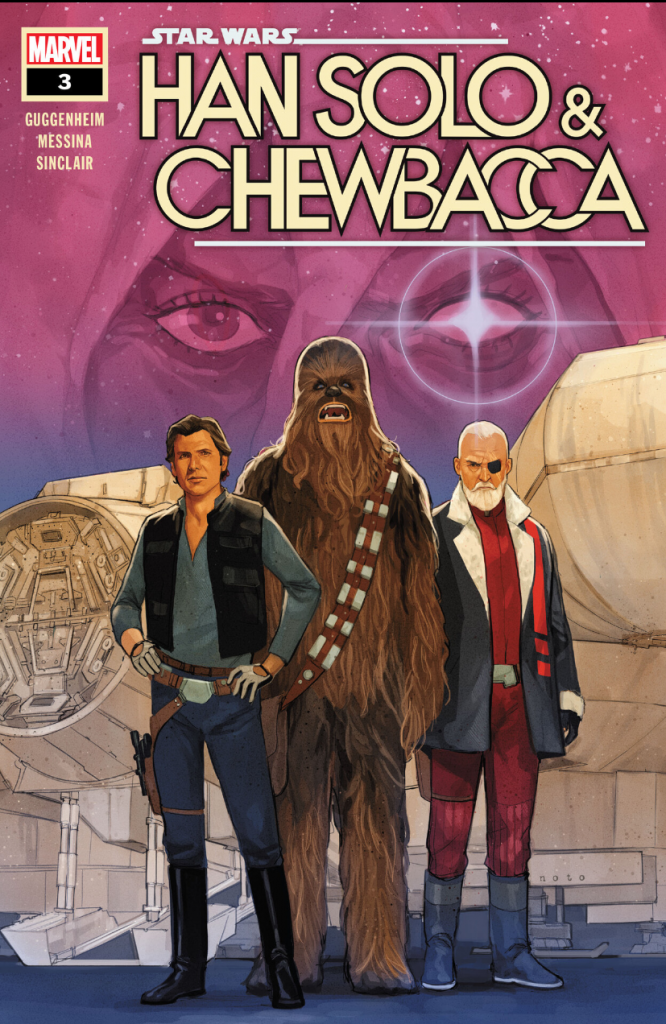 The issue begins immediately where the previous one left off. With Han, Greedo, and Ovan trying to craft an escape plan from the Locris security forces. After Greedo’s attempt to blast the “blaster proof” window open it gives Han an idea. Quickly searching the area, he finds a few things that will be useful in the future. The first of which is a plasma cutter. 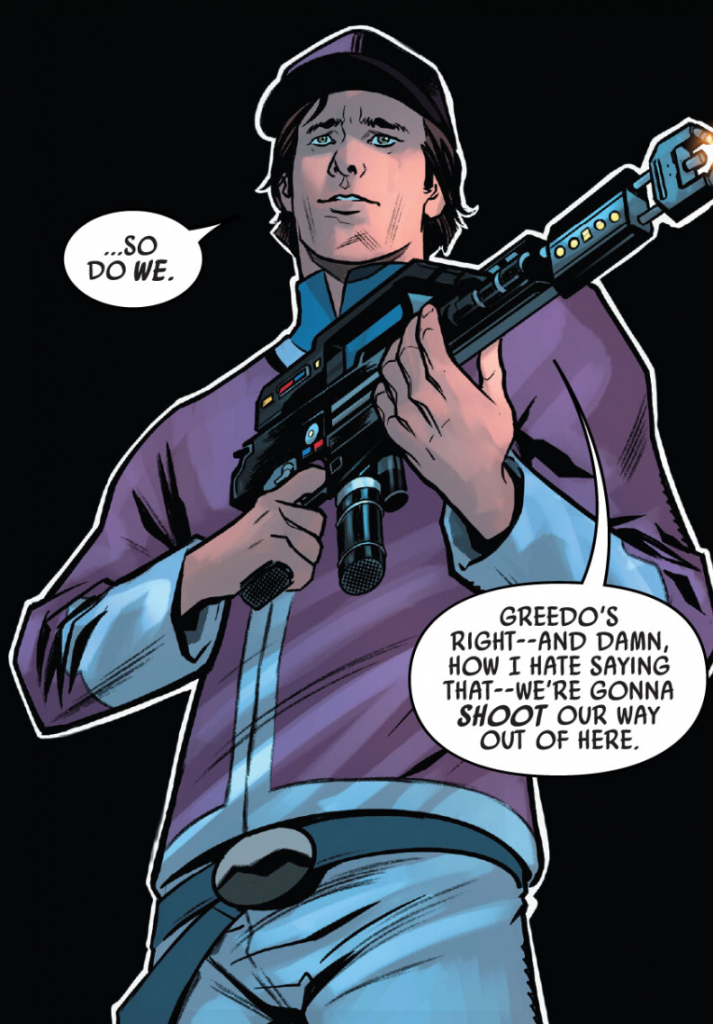 Solo poses as Locris security and calls in for support via the comm system. He’s hoping the security forces don’t communicate well with another and that they will blindly drop in a medical transport to the window. In a stroke of luck, the Locris medical transport arrives unaware they are being bamboozled. While Han sends the officers on a wild bantha chase, the three of them escape through the now-blasted open door and steal the transport. 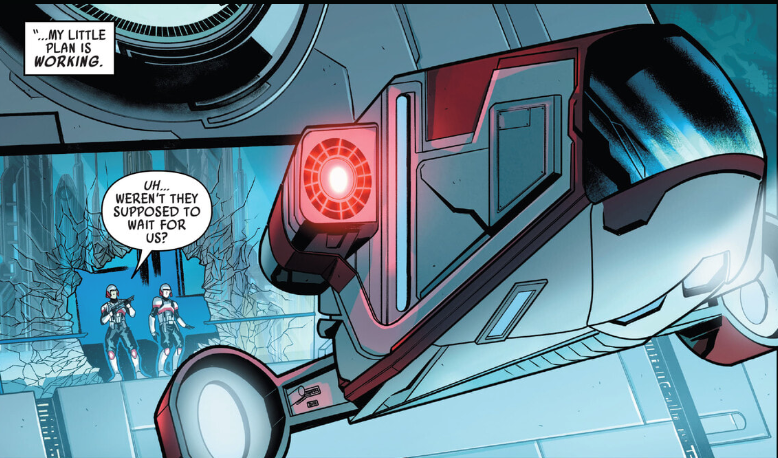 After reuniting with Chewie, Han immediately wants to set a course for Antillion. One of the useful things he discovered during their escape was the updated location of the urn Jabba hired them to acquire. As the trio begins preparations for takeoff, Ovan inquiries about Greedo. There is clearly no love lost between the two. Rather than rivals, it’s clear Han views him as little more than a nuisance. Han doesn’t shed a tear as they abandon my favorite Rodian on Corellia. With security forces after him on the planet I am curious as to what will happen to him until he is able to escape. I missed Greedo in the latter half of the comic. Him and Han’s back-and-forth has been an enjoyable aspect of the arc so far. 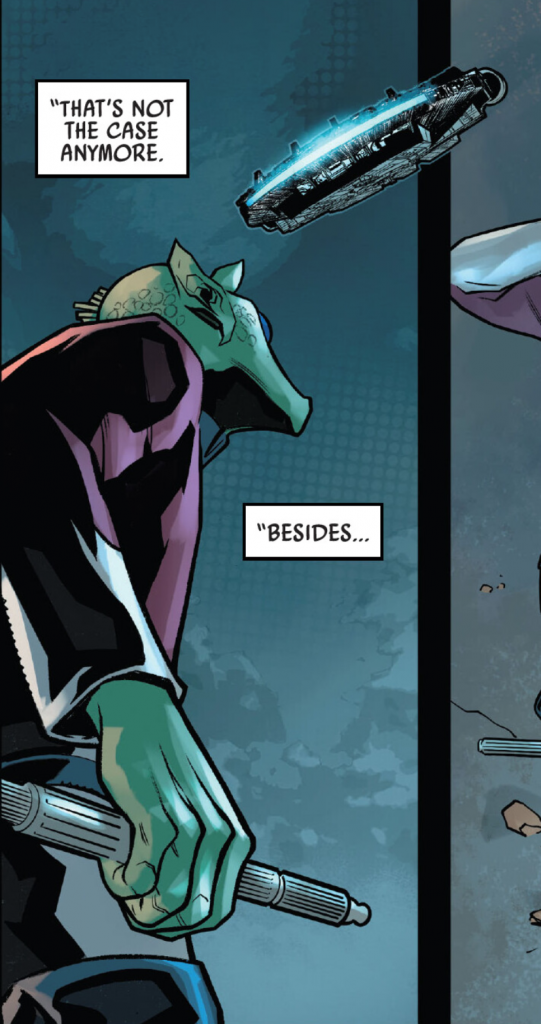 The crew makes for Antillion, and we discover a sweet surprise once we arrive. The urn was sold to none other than Madelin Sun. Those familiar with the Crimson Reign arc by Charles Soule know Madelin Sun to have been a former scholar who spent her days studying the dark side and the Sith on Coruscant. Fortune didn’t favor her well when the Empire rose to power. In Crimson Reign we simply know her as The Archivist. She was rescued from Imperial stormtroopers by Qi’ra and has served her ever since. In this issue, she is still in the business of selling goods on the streets of Antillion. Although this doesn’t last much longer. Han attempts to negotiate with Madelin, but like most of his negotiations it doesn’t end in success.

After the failed attempt, plan B is set in motion. This is where it truly becomes a crossover. The stormtroopers Qi’ra saves Madelin from in Crimson Reign are the troopers Han sends over to her in the first place. Does Han feel bad about lying to troopers about Madelin having illegal contraband? It’s Han Solo, so probably a little yes and a little no. Han, Chewie, and Ovan see Qi’ra walk out with Madelin in the same scene we see in Crimson Reign.

I have mixed emotions on this crossover. On one hand, it doesn’t detract from Han’s story, but on the other it makes the galaxy feel a bit smaller with many of the arcs being so interconnected right now. It’s unclear whether Han recognized Qi’ra. I’d assume he didn’t because I’d wager he would’ve had an instant reaction to seeing her, but it’s also plausible he didn’t want to show any emotion around his pops.

Once inside Madelin’s now-abandoned home, Ovan and Han search for the urn they came for. Ovan finds it, and the two of them share a happy “father and son” moment before all hell breaks loose. It seemed as if everything was going a little too easily. A big boom was bound to happen.

After the explosion sends his father careening across the room Han comes face to face with a fearsome face. It’s a Wookie, but not the fun-loving fur ball we all admire. It’s Black Krrsantan. This image is everything you’d want. Krrsantan looks as menacing and terrifying as you imagine he would. He looms monstrously over Han as he holds him by the neck. Great work by David Messina. 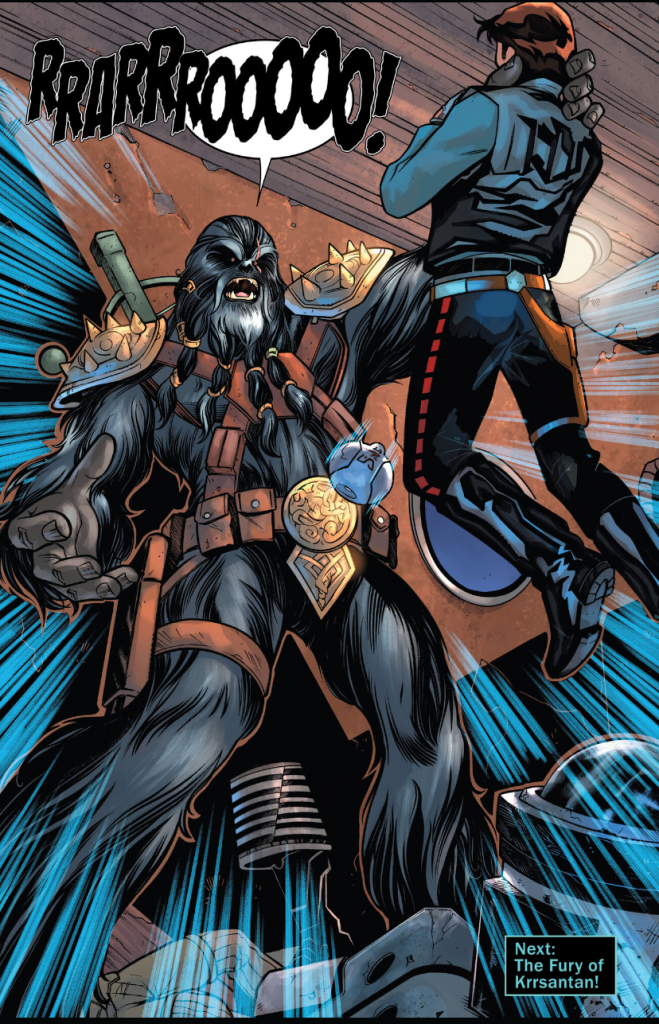 The first three issues of Han Solo and Chewbacca have been pleasant so far. Guggenheim captures the essence of Han better and better with each issue. However, this arc has another level it can reach. Han Solo is one of the most revered and charismatic characters in all of Star Wars. This can be a great comic series, but it has some work to do to reach that stratosphere. I am excited to see how this confrontation goes in issue #4.

Finding ways to nonchalantly incorporate Star Wars quotes into his daily meetings at work, Tyler lives and breathes Star Wars. His morning tradition is sending the latest number in the countdown for different Star Wars projects and loves engaging in uplifting Star Wars dialogue. If you are passionate about  Star Wars you can follow him on Twitter at TyBrad5.