We’ve spent a few months now watching Darth Vader and Sabé taking on Governor Tauntaza and her secret project. The arc was starting to get a little drawn out, but thankfully, Greg Pak saved the best for last and ended it on a high note.

Issue #27 gives us some great character development for Sabé and shows Darth Vader at possibly his most vulnerable in the entire series. There’s even a pretty cool easter egg for Star Wars Legends fans. There’s a lot of entertaining set pieces here; it’s just a shame it took a few issues to get to this point.

Thankfully, the issue doesn’t waste too much time getting back out to the mobile facility once Sabé and Kitster are safely returned to the group. Vader orders a bombardment from the Super Star Destroyer, but it seems Tauntaza’s mobile facility can withstand a blast from anything short of a Death Star. The detective droid reads R5’s schematics and deduces that its one weakness is its underbelly, which it uses to drain the planet’s energy. 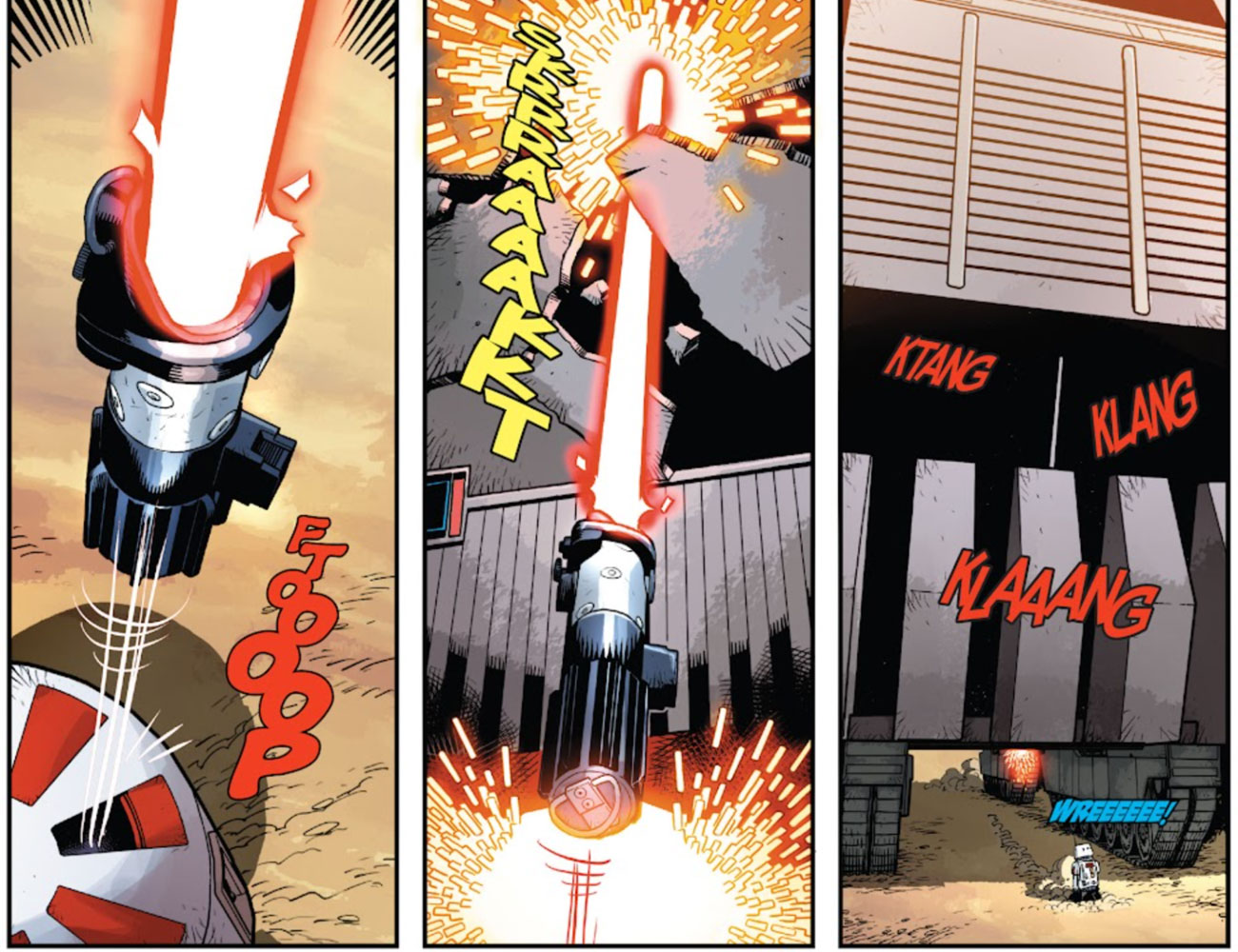 It’s here that we get our first easter egg of the issue. Vader walks back to the tank with R5 and uses the same lightsaber trick as Luke in Return of the Jedi. His ignited red blade pops out of the astromech, and he uses the Force to propel it inside the tank’s underbelly, forcing the facility to go critical. It seems a little odd that something so small could cause so much damage so quickly, but I love the creativity.

Realizing that Vader has boarded the facility, Tauntaza gets suited up in an exoskeleton that looks strikingly reminiscent of the old dark troopers from Legends continuity. It brought back a nice dose of nostalgia seeing that look again, and it made for a short but badass fight between her and Vader. Predictably, she overestimated her own abilities, and Vader defeated her fairly easily, though the blast from the facility explosion fried his armor. 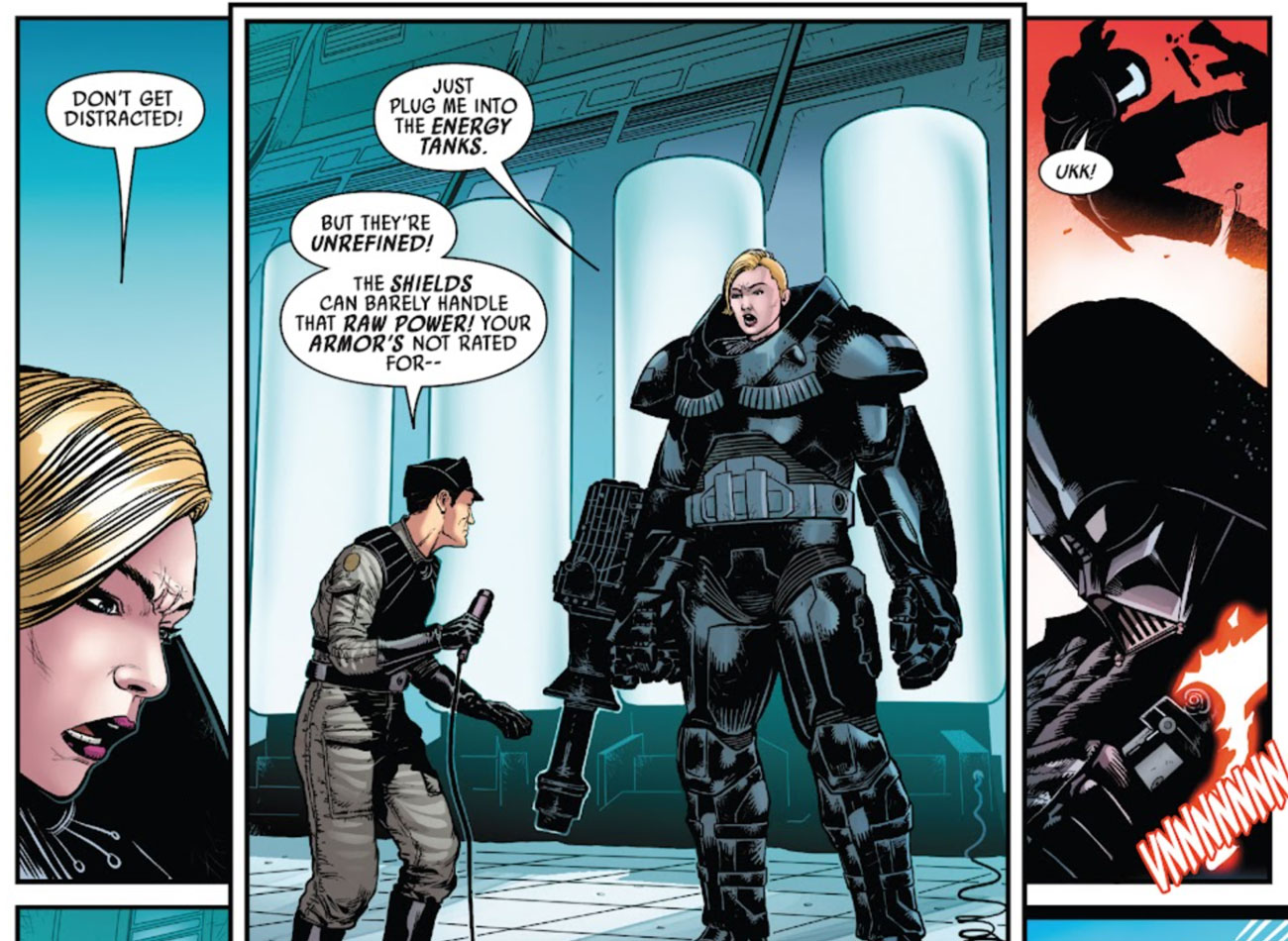 It’s not often that we see Vader this vulnerable. I do think that in another issue, he would have used the Force to perform another superhuman feat and save his own life, but instead Sabé arrived on the scene, and we got a great bit of character development for her. As she stands over Vader’s body, she wrestles with her strong urge to finally kill the dark lord against Padmé’s insistence that there remained some good in him.

The panels flashback to another scene from The Phantom Menace, on Coruscant, when Anakin goes to see Padmé but is greeted by Sabé instead. It’s that memory that convinces Sabé to give Vader one final chance. For all her desires of revenge, she decided to honor Padmé instead and hope that her former queen was right about him. It’s a nice example of the light side winning out over the dark, considering what Vader ends up doing in the near future. 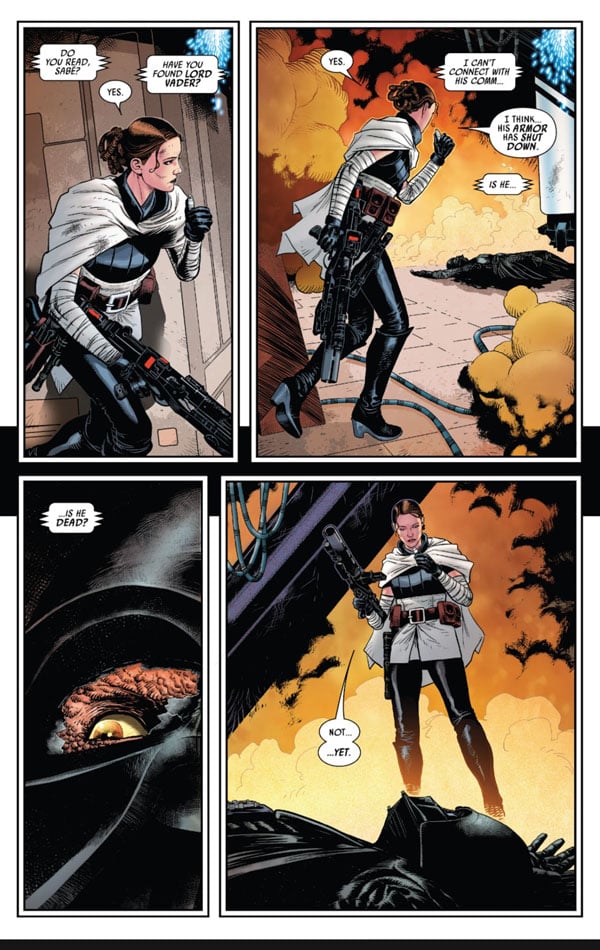 It’s an important step for Sabé, and with this arc finally over, it’s difficult to know what will be in store for her. It seems likely that she will meet her end soon, as the cover for the next issue shows Palpatine lurking behind her, but how exactly is not clear.

At the very least, we can be reasonably certain that Palpatine will return in issue #28. It was revealed at the end that Governor Tauntaza was receiving orders from Palpatine himself, so presumably he won’t be best pleased that Darth Vader has ruined one of his secret projects. That said, that’s the price he paid for not letting his pupil in on his secrets, so you’d hope he’ll recognize that. I think his concerns will be placed squarely with Sabé and the influence she could have on Vader.

We know that Palpatine will go to any length to ensure that he is the only influential figure in his apprentice’s life, so presumably he will be eager to take Sabé off the board as soon as he can. Now that the Tauntaza arc is over, we’ll get to see what’s in store for her soon enough. 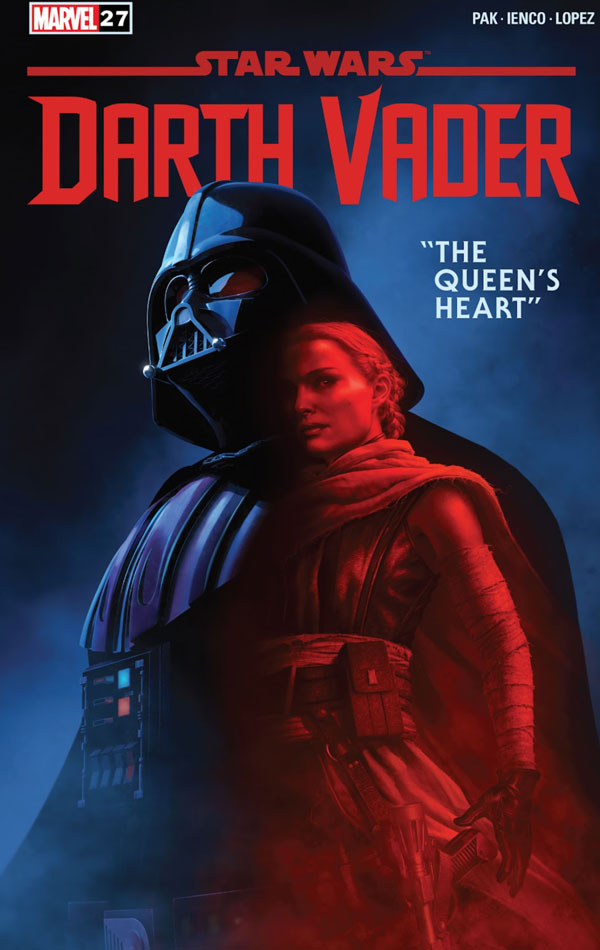 Josh is a huge Star Wars fan, who has spent far too much time wondering if any Star Wars character could defeat Thanos with all the Infinity Stones.